The Day I Learned Too Much About Turkey Vultures

This morning I had a really cool experience as I watched two turkey vultures in flight.  I have never seen them fly before, I’ve only ever seen them on the side of the road eating dead things (dead things, Mikey, dead things).  I was driving down my street when one caught my eye.  Fortunately there were no other cars on the road so I wasn’t in anyone’s way.  I watched them circle around gracefully and land in a tree in a yard not too far from where I was stopped.  Naturally, being the weirdo that I am, I followed them.  It was only two quick turns before I was sitting in front of a stranger’s house with my four ways on.  I tried to take a picture of them through the car window (you know, super casually) but they were too high up so I had to get out of the car to take the picture.  As I stood there in the middle of the road, in front of some random house, pointing my camera up at the top of their tree, I thought about what a weird sight I might be (you know, other than my blue hair, bright green leggings, and red coat). 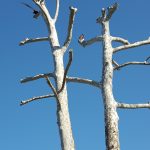 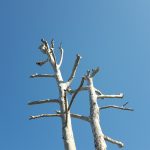 I was in a hurry to get the picture before someone came running out of the house and yelled at me so they aren’t that good.

I quickly jumped back into my car and sped off, hoping that I didn’t freak out the people whose house I was standing in front of.  Assuming that they were still alive, that is.  My wildly over active imagination was painting quite the macabre picture of a slain family inside the quiet house on the quiet street (there may or not be a turkey vulture short story coming very soon to a blog near you… consider yourself forewarned).

All of this was in the back of my mind as I drove to my parent’s house.  I was very excited to show my grandmother the pictures that I had taken, tell her about what I saw, and share my nefarious theory about why they were there (she reacted with a very concerned, “Whaaaaaaaat?!” when I proposed that the house may be full of dead people, murdered quietly in the night.  She may or may not be terrified of me now).  As usual my thought process went in a million different directions and by the time I got to my parents I was dying to get in some quality time with Mr. Google and learn everything I could about turkey vultures.

Now, we BOTH know more about turkey vultures than we ever wanted to know.  Also, I hope you read that in the voice of the guy who does the honey badger video, because that’s how it sounded in my head.  Oh, and even though they are super heinous looking, they are strictly scavengers and almost never kill other animals for food (but, nothing I read mentioned killing for the sheer joy of it, which I have my suspicions about).