I think that I have been walking a thin line between thinking that my daughter is some super advanced genius child and maaaaaaybe there’s something wrong with her.  On the super-genius-child side we have the fact that she is excellent at making connections.  We taught her that if you rub your fingers together (you know, in the universal “psst psst psst” way that you call cats), the cats will come to her.  She chases them around the house doing it and it’s great fun for everyone that isn’t a cat.  Today we were playing with a farm toy and it had a picture of a cat on it and she did the “psst psst psst” thing with her fingers to the picture because it’s a cat and she knows that cats like that.  I found that to be absolutely brilliant.  She has also become quite the mimic.  She walks around pretending to talk on the phone and wiping down the furniture with anything “wipe like” that she can get her hands on.  You know, just like mom, always gabbing on the phone with somebody or running around cleaning.  She thrives on a reaction from us.  If you laugh at something that she does, she will put on a little show and do it again to get more laughs.  On the down side of that though she thinks that anytime we tell her “no” it’s just the beginning of a super fun game where she does whatever she is not supposed to do again, and I run after her, pulling my hair out and trying not to cry while correcting her.  Actually, this is more of an evil genius kind of thing because it doesn’t matter that the thing she is trying to do is bad (like why she needs to try and put her hand in my grandmother’s water glass all day is beyond me), she loves it and she will find any way that she can to keep doing it.

And then there is the stuff that she doesn’t get.  I found her licking the stairs yesterday.  Just standing there, hands down by her sides, acting like the snozzberries tasted like snozzberries.  She licks the fridge (which I probably should just give her a tick in the win column for because after all, that is where the food lives).  She has only mastered one word so far, and it’s “hi” and she says it about a million times a day.  It’s precious and adorable but really, she could not have picked an easier word.  I’m trying to get her to say banana but she’s struggling with it.  She gives it more “na’s” than Batman gets.  I worry that she’s behind with language.  I mean, she’s only 13 months old*, put a little more pressure on her, right? 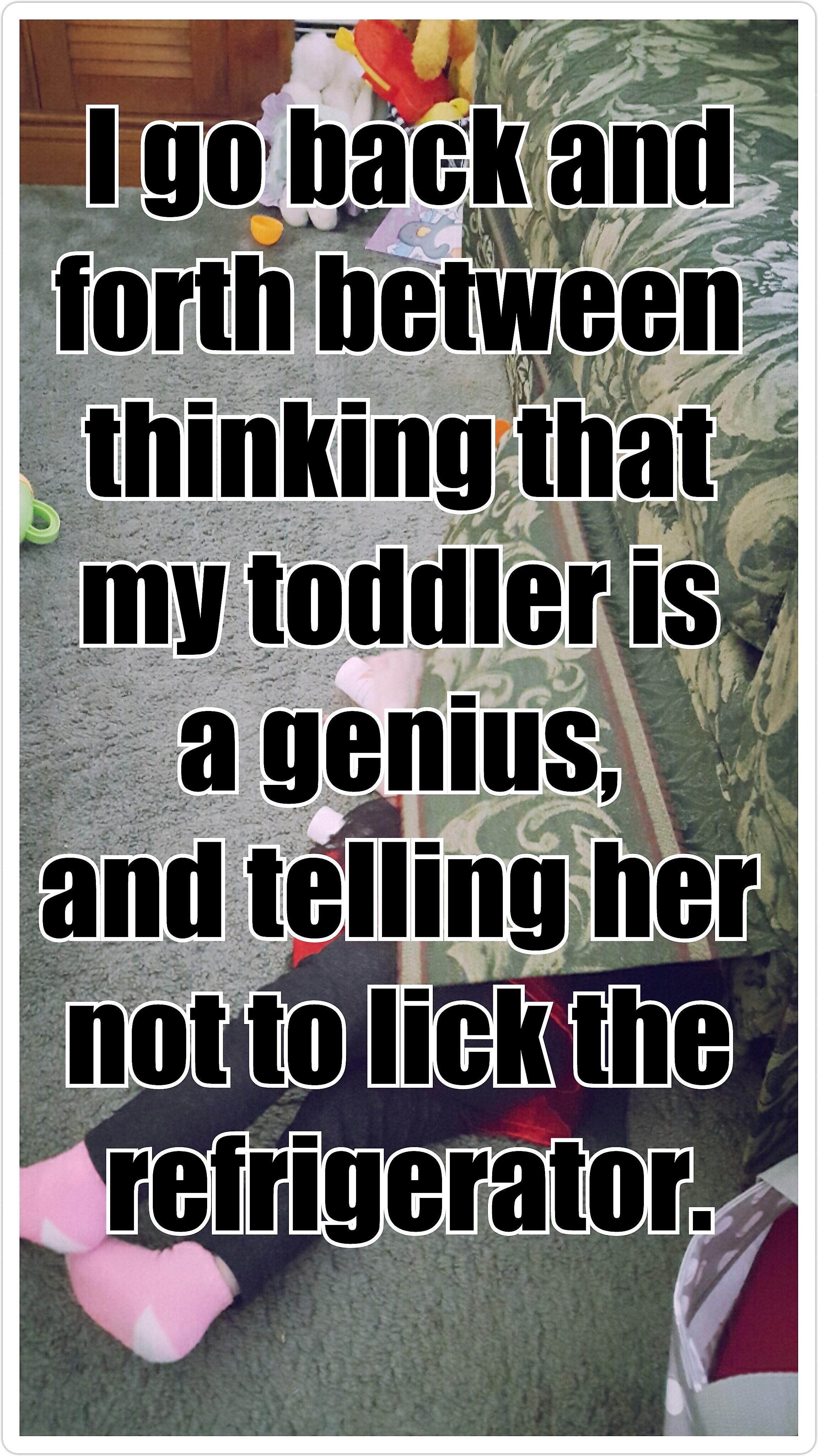 This is one of the hard things about parenting.  It’s the constant need for her to be “typical”.  I went through it when she was first born and we were having to make bimonthly trips to the pediatrician to have her weighed because she was below the third percentile for weight.  It ended up being the result of an undiagnosed dairy allergy which has thankfully cleared up.  I really struggled with that number.  I also really struggled with comments from random strangers about her weight.

Here’s a PSA for everyone in the world ever, DON’T COMMENT ON PEOPLE’S WEIGHT.  It’s not something most people can change.  And it’s none of your business.  If you have to say something about their weight say it behind their back like a normal person.  And don’t ever tell a mom that her baby is too small and ask a bunch of invasive questions about whether she’s sick or was she a preemie or what does the doctor think?  Because what was missing from the stress of having a newborn with slow weight gain is having to explain myself to the sales woman at David’s Bridal.

Anyway, I got way off topic because I just got all stressed out about her weight again when it doesn’t even matter.  She is up to where she is supposed to be now.  A number that someone, somewhere, decided was the best number.  But this is just it, it’s the constant need to meet the goals and to be like every other kid.  It’s stressing me out.  She is perfect just the way she is.  Even if she just runs through the house yelling “hi” while chasing cats and pausing briefly to lick everything.

Do all moms go through this?  Or am I just a crazy person?  Today she was running through my parent’s house on her tippy toes and I swear to god I thought, “Okay, she’s autistic.”  Of course when I talked to my mom (who is a normal non-crazy person since her children are all grown) she basically shot down my autism theory and told me that all kids go through a phase where they do that and to just cool my jets.  So, here I sit, jets set firmly on cool.  And I can’t help but wonder when all this fear goes away, and if it even does.  Part of me just assumes that as she gets bigger, so will her problems.  It will never end and OH GOD, WHY DID I DO THIS?!

*This was originally written four months ago.  A lot has changed.  She now says about 50 words (and can probably sign just as many), some of them well enough that people who aren’t me can understand them.  The stairs have apparently lost their appeal but now she really enjoys licking the coffee table.  My jets are cooled at least half the time.  The other half of the time they are set firmly on blast, or whatever jets do when they are in a state of constant terror.

I wouldn’t change it for the world.

Except maybe to add a few more babies into the mix.

Maybe I am a crazy person…