I had a moment this weekend where I looked at my husband, smiled, and said, “Our life is kind of perfect right now.”  We were tired, sweaty, and on what was probably our third straight hour of working on the yard.

I leaned over, gave him a kiss, and went back to watching our daughter play in the area that once held our fire pit (read: hot drinking circle party place).  The fire pit had been dug out and taken apart.  All the fire proof bricks had been relocated.  I had painstakingly searched all the surrounding river rocks for old bottle caps, broken glass, and rusty nails*.  Things that were fine for a large group of drunken adults, but not so fine for my daughter’s constantly exploring hands.

It had been a project that we worked on a few minutes at a time over several weeks.  Our super cool hot drinking circle was no more.  Now it was an outdoor toddler haven.  There were water tables and sand boxes a plenty.  Slides, swings, miscellaneous other crap, set up all over the entire yard in the perfect intervals for optimal play time.

What was once a blazing hot drinking circle. 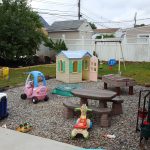 What is now a pastel waste land of plastic and toddler joy.

Naturally, our daughter was oblivious to all the changes and hard work.  She was too busy trying to drink the gross water from her water table.  And too busy taking wet handfuls of sand and rubbing them into her hair.  Occasionally she would stop doing those things long enough to look me in the eye as she took a handful of sand and threw it on the ground, daring me to yell at her.

Honestly, she probably could have punched a bird in the face and I wouldn’t have said anything to her that day.  It was just so nice having her so occupied by something that she enjoyed that required little to no participation on my part.  I was able to clean the windows, pull weeds, and finish collecting all those old bottle caps and rusty nails.

As I ever so gently folded freshly mashed bananas into my dry ingredients (just like the directions called for) I decided two things.

First, directions are for suckers.  I’m not gently folding shit.  Instead I got out the flat little bowl scraper thing and stirred everything up.

Second, I’m kinda into this whole mothering thing.  Like, I think that I was made for this.  Muffin baking and all.

That’s not to say that I don’t have bad moments.  Or bad days.  Sometimes I pour myself a pretty big glass of wine at 4:00.  Sometimes I pour myself a second pretty big glass of wine at 4:30.  It’s not all sunshine and rainbows.  It does get ugly.  I have lost my temper and yelled (more often than I’d like to admit).  I’ve started my coffee before changing my daughter’s diaper in the morning.  I’ve eaten cookies in front of her while not feeling bad at all about her begging for one.  I’ve cried because I have no god damn idea what I’m doing.

But then there are the good moments.  I’ve held her in my arms as she fell asleep, unable to look away as those tiny eye lids fluttered and then closed.  I’ve sniffed in that sweet baby smell until I thought I would sniff it right off of her (unlike the times that I’ve inhaled the bouquet of fresh turds, which actually happens way more often than the other sweet baby smell thing).  I’ve read the same books over and over again as she sat in my arms.

And, I’ve made carefully researched and crafted muffins from scratch that she has taken a bite of and then thrown on the ground because sometimes she’s a jerk.

Even though there is a lot of hard stuff, there’s so much good stuff too.  It makes me happy.  It gives me hope and fills me with excitement for the future.  It gives me… a mom boner.

Yeah, a mom boner.  I definitely just said that.  Baking tiny muffins and researching cloth training pants and taking perfectly lit pictures of her gives me a raging mom boner.

And it all makes me happy.

Even the bad days because they pass and there is some weird mom amnesia (momnesia, it’s a thing) that lets you forget about how god damn awful everything was yesterday.

I will miss the fire pit and the drunken nights surrounding it with friends, but I know that there is a second act starting in the back yard.  One with less bottle caps and more sunscreen and sand.  And there will be more homemade muffins, because even though it’s not cool to admit it, I am really loving this mom thing.

*The fire pit is full of rusty nails because when you throw a huge party on a cold March morning and run out of firewood you burn the dog house.  Which is totally okay if you don’t have a dog.