If you think sexism is dead, you clearly haven’t been car shopping lately

Just before Christmas, my husband’s car made its final drive home from work.  We had known for a while that a new car was in our future, but we had hoped that it could wait until after the New Year (or more accurately, until after our tax return).  As usual, the universe had different plans for us.  Which is how I ended up braving the sleet and snow to go to the car dealership early one Saturday morning with my husband and toddler in tow.

I called ahead of time and completed the credit application so that I could figure out what our price range would be.  After a few hours of painstaking and mind numbing online research I had found both my absolute dream vehicle (which was nowhere near our budget but came with a built in vacuum, A BUILT IN VACUUM, PEOPLE), and the more reasonable “doesn’t cost as much as a down payment for the average American home” one.

With a family that consists of three adults and two kids in car seats, we really only had the one viable option, a minivan.

Before I go any further, let me explain my initial hesitation to get a minivan.  It’s not that it’s not “sexy” or that I’ll somehow morph from the wild and unique individual that I am currently, into some sort of Stepford Mombie (side note: the word “mombie” is pretty awful, let’s pretend I didn’t just say that).

My issue is that a minivan is basically a bus.  They are enormous, gas gobbling dinosaurs that come with one hell of a price tag.

Dinosaurs that can seat up to seven, have back-up cameras, sliding doors, and if you’re really lucky, DVD players.  Also, they come with the built in argument that we can totally someday have that third kid, WE ALREADY HAVE THE LEGROOM!!!

It was armed with this information, and my shiny preapproval (including my downright baller FICO score), that I walked into the showroom to meet with a car salesman.

Apparently, I was also walked right back into the 1950’s.

I had been emailing, speaking on the phone, and chatting over instant messenger with the car dealership for two days now.  I had relayed all of my financial information, what I was looking for, and had explained that I would be there with my toddler (that one came with copious apologies).  We spent about two minutes rehashing everything we had gone over in the past 48 hours before he informed me that he would just wait until my husband (who had dropped us off at the door due to the aforementioned snow/sleet/rain) arrived.

Instead he used this time to tell me that housewives and stay at home moms work harder than anyone else (yes, that’s a wonderful sentiment but at no time did I mention that I was either), and then promptly started asking me about my husband and what he does for a living.

While I understand not wanting to have to repeat yourself; I am the one buying the car (which we had also already established I would also be the primary driver of), I am the one with the credit approval, and I am the one sitting there waiting for you to start doing your job…

Sadly, this wasn’t the first time I had this type of experience here.  A few years prior my husband and I sat in an adjacent show room to purchase his old car.  We had a really nice salesman that was very good at his job and made sure to give us both equal time and attention.  Granted, the topics he covered were different.

With my husband, he went over the safety features including the built in On Star that would keep him from having to worry too much about me while I was out on the road driving by myself (you know, if I was allowed out driving by myself at night).  When he talked to me, it was about how his wife was a homemaker and how much she loved it (I was still very much a career woman at the time).  He insisted on calling me Mrs. Wellbank even though we weren’t yet married, a fact we had mentioned several times.

The time before that, I couldn’t even get a salesman to talk to me.  It was like that scene in Pretty Woman.  I had cash in hand, and not a single salesman would so much as look at me.  I wasn’t dressed like a prostitute, but I was in a sweat suit and had the misfortune of being a girl alone in her early twenties.

I don’t know, maybe I lacked the appearance of a serious car buyer.

So, why do we keep going back to this dealership?  And why am I allowing the perpetuation of a terrible standard?  In front of my young daughter, no less.

“Smash the patriarchy… unless they are giving you a great deal on a Chrysler Town and Country.”

The answer is twofold.
First, I like the dealership.  They have their own test driving course on which you don’t have to deal with other traffic in a car you are unfamiliar with.  The campus is huge and there is plenty of room for my daughter to roam during the 10 hour outing that is buying a new car.

Secondly, they were all nice.  And that gentle, benign, sexism that you receive at a car dealership doesn’t really seem like that big of a deal when compared with everything else.

Plus, it borders on being chivalrous (I mean, this guy did offer to have my husband go out into the snow/sleet/rain with him to get the car and pull it up to the building for me to look at).  Can you really rip into a guy that is making it so that you only have to walk five feet from the door to the car in the icy parking lot (while about six months pregnant no less)?

“No thanks, dickhead, I’d like my husband to stay here with our daughter while I walk around the lot for twenty minutes.  Maybe next time, oppressor!” 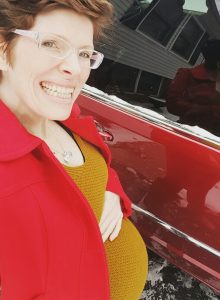 I’m smiling because there is so much room for activities and not because my jacket matches the minivan.

I’m sure there is a happy medium.  I’m sure that there would have been a way for me to redirect the conversation away from how much I enjoy baking cookies while my husband breaks his back bringing home the bacon, back to my FICO and whether or not I’d like something with all-wheel drive.

But I couldn’t come up with it.  So instead, I betrayed my gender (and sadly, probably not for the last time in my life) and agreed that yes, this shade of red really is a lovely color.

So, now I have a shiny new mommyvan minivan and nary a shred of dignity left.

Ten surefire gifts for any mom on your list this Christmas

Reasons why a toddler is your must have pregnancy wingman