How to enjoy St. Paddy’s day like you don’t have kids when you actually have a couple kids

Seven steps for enjoying St. Paddy’s Day like you did before you had kids. 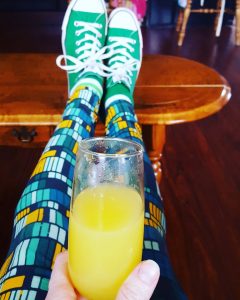 Step one: Dress your kids up in their St. Paddy’s Day finest. I am talking head to toe green, orange, and white. You’re going to need a gigantic green bow for their hair. This works for girls, boys, and patient dogs alike. Put giant green bows on everyone, you won’t regret it. Take pictures because OMG how cute are your kids in matching/themed/clean outfits? Immediately post said pictures to Facebook and Instagram (#littleleprachauns #luckyAF), and tell your husband that maybe you should have another baby #luckynumber3. Spend the next half hour changing a blown out diaper, navigate a meltdown over what socks to wear, and repack the diaper bag three times because SOMEONE keeps pulling the diapers out and throwing them around the kitchen. Tell your husband it’s time for that vasectomy. Load up the car with everything anyone could possibly need for the next 24-hours, for your ten-minute ride to your parent’s house.

Step two: show up on your parent’s door step. Do a cute little knock on the door and wait patiently for your parents to answer because they are going to love being surprised with their adorable grandbabies on this beautiful almost spring morning. Knock again when they don’t answer. See the curtain move ever so slightly and call your mom on her cell phone. Hear the familiar ringtone of your mom’s phone inside the house, along with the hushed sounds of your parents talking. Receive a text message from your dad saying that they are out, and asking if everything is okay. Furiously text back and forth about how you thought you would surprise them by “giving” them an afternoon with the grandbabies. Find out that they were looking forward to going out for St. Paddy’s Day because it’s finally on a Saturday again. Call your sister, your brother, and your elementary school teacher to see if anyone is available to watch your kids for two hours. No, nobody wants to watch your kids. It’s St. Patrick’s Day. Why did you even have kids if you didn’t want to spend every single minute of every single day with them? Also, regret not having made plans in advance. You used to be such a planner? What happened? Huff, puff, and tell your husband that you have to change your plans.

Step three: it’s okay, you can’t go out to the pub that you wanted to and get a day load on just like the good old days. Instead you’ll go to the local brewery (that also serves food, it’s basically the same as a family restaurant) and get the kids some chicken fingers. Your kids love chicken fingers. You and your husband can sip on green beer and look longingly around you at the kid-less people who are kicking off their pub crawl with zero responsibilities holding them back. It’s okay, you’ll joke, who’s going to be laughing in the morning when they wake up tired with gigantic hangovers and you both wake up… well… you won’t be dehydrated, that’s for sure! Struggle to find parking at the brewery (this parking lot was not made for minivans). Once safely parked, walk into the restaurant to find wall to wall people. Looks like you weren’t the only one with this idea! The place is jam packed with families and a few rowdy revelers. The wait for a table is over an hour. Decide that this was a bad idea and you’ll just get takeout and go home.

Step four: sit in the minivan with crying children while your husband runs into a takeout joint to get a six pack and some pizza. The kids are crying. Partially because they don’t want you to keep putting that bow back in their hair, but also because you started off on this adventure almost two hours ago, and you have run out of treats to bribe them with. You only packed so many gold coins in the diaper bag and you’re out of emergency goldfish crackers. But your husband is coming out of the store. He has a pizza and a six-pack of something with a shamrock on it. Everything is going to be okay, because you’re going to go home and put on Darby O’Gill and the Little People, and have three beers each and relax while the kids play.

Step five: What the hell was up with Darby O’Gill and the Little People? Now you’re going to have to explain a bunch of stuff to your kids that you weren’t planning on. Oh, it’s from 1959? That makes more sense. Thanks, Disney. Was that movie always this weird? God, I remember watching this all the time as a kid.

Step six: well, as it turns out nobody watched the movie except for you anyway. The kids both decided to sit on your lap, making both your beer and pizza just out of your reach. But at least they were quiet until they passed out. Your husband was playing on his phone the entire movie. Now everyone is asleep except for you. Hop on your phone to check Facebook. Scroll your newsfeed and see all the pictures of everyone out drinking green beer, doing pickle backs, and wearing oversized green glasses. Husband is snoring by the time you scroll across the picture of your parents at the very pub you were trying to go to. Your mom has a giant green bow in her hair.

Step seven: fall asleep on the couch exactly five minutes before everyone else wakes up. Escape to the bathroom to eat Irish Potatoes by yourself. Vow to plan better next time, knowing full well that you’ll spend next year doing the exact same routine, but you don’t really care. You like lying to yourself. Just like that time you pretended you could do anything the way you did before you had kids. Good times.