The first time I was teased about the way I looked I was in elementary school. We were sitting in class when the boy sitting next to me said something about my hair. Then the boy next to him joined in, and another boy on the other side of me jumped in, and my first nickname was born: Medusa. 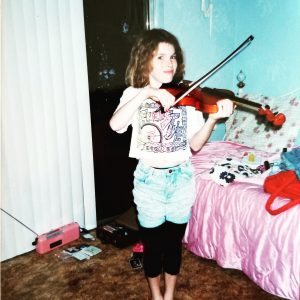 Yeah, that was an at home perm, hard to tell, right?!

The name spread through school like wildfire, and before long it was being shouted at me on the playground and whispered as kids passed by me in the lunchroom. As we lined up in front of the building each morning, waiting for the doors to open, a hundred voices would chant it at once, “Medusa, Medusa, Medusa.”

It was the early 90’s so my nickname was based off of equal parts Greek mythology, and a box perm given to me by mom in our kitchen. Looking back now, the resulting in-home makeover wasn’t so horrible to warrant the ire of an entire body of students. It was probably just a case of me and my new hair being in the wrong place at the wrong time.

Eventually, the kids forgot about it, or found someone else to go after. I don’t remember which, but in the summer between elementary school and middle school Medusa had died and Undertaker had taken her place.

With my perm long since grown out, I stood in a horseshoe of the neighborhood kids and their bikes. We were at the tail end of an argument about something mundane, I can’t even remember the specifics except that I know I had been mad when one of the boys laughed at me and said, “Anyone ever tell you that you kinda look like Undertaker?”

For the rest of the summer anytime I was out on my bike, the boys would ride over to chant it at my back. They’d take turns delivering insults until they grew bored or I finally laughed it off.

Laughing it off was a trick I learned while waiting for those heavy double doors to open and let me into my elementary school each morning.

Laughing always made it feel like I was in on the joke. A good natured girl who was just one of the guys. 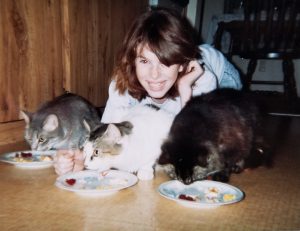 They’d make fun of me and laugh, I’d laugh back, and that would be the end of it. Eventually they’d move on, or school would end, but it always stopped.

One morning while I was sitting on the curb, waiting for the school bus, an older kid crept up behind me and dumped a ziplock bag full of canned tuna fish over my head.

The following year my best friend and I approached our French teacher to ask her if we could come to class a few minutes after the bell each day. Some 8th graders had been cornering us in the halls between classes for a few weeks. This time things had escalated and got physical.

“We won’t be loud when we come in, honest. We’ll just slip in and pick up right where you guys already are.”

Everyday for the rest of 7th my best friend and I lost the first few minutes of French class to hiding in a bathroom until the bell rang. We’d race through the now empty halls, past the spot where a group of girls usually waited to hurl insults our way, and into the back of class. We’d sit down quietly, pull our books out, and join in on whatever lesson we were learning while making as little noise as humanly possible.

I used to bite the insides of my cheeks as hard as I could to distract from the shaking in my hands and the heat in my belly. I would clench down and try to steady my breathing, slow my racing heart, and focus on something good. As an adult, I recognize those as feelings of fear and anxiety. These days the instances of cheek biting are few and far between (and mostly revolve around public speaking).

As a kid, that feeling was every day. Every day I grappled with the feeling that I was going to stand up in front of hundreds of people and freeze up, or forget what I was going to say. The child in me faced down a chanting group of my classmates the same way adult me gets up to give the toast at my sister’s wedding: teeth clenched, hands clasped together, and a smile plastered to my face. 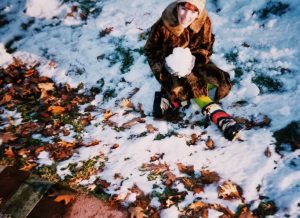 From sun to snow

The kids I grew up with weren’t all bad. We moved from Florida to Pennsylvania the summer before I started high school. My cousin introduced me around and helped me make friends.

There was a football player my first week of high school who walked up to my empty table in the cafeteria and offered to keep me company while I ate lunch. Eventually I made friends, and managed to go the next four years without a nickname. And then the ten after that, and the ten after that. If people made fun of me I didn’t know, or even better, I didn’t care.

A few months ago, during a quick trip to the mall I felt the old familiar sting as I overheard a couple of teenage girls making fun of my hair. Pushing a stroller, I hardly slowed down as I almost reflexively laughed, “HA HA” and kept on going. But by the time I bucked my girls into their car seats I started remembering all of the other times I’d been made fun of.

I was annoyed and a little hurt. I thought I had left all of those feelings of not fitting in behind, or better yet, that I had stopped caring about them entirely, but apparently I hadn’t.

Because it’s 2018 I shared my experience on Facebook. What had started off as a plea for parents to talk to their kids about how their words have power, turned into a reminder of how truly good – and how awful – people can be.

My post ended up being shared to a Facebook page dedicated to organising trolls online. Commenters poured onto my page making comments that ranged from reinforcing the tired trope that I was an ugly weirdo to telling me that if I ever wanted relief from the taunts of others, I needed to change. I stopped reading the comments, and began deleting and banning the people behind the posts. I was *this close* to getting upset, to allowing all of those old emotions to come flooding back in, when I remembered something my mom had said when I was a kid.

There was a day that we were running late, and my mom had to drop me off at school. As soon as I opened the car door to hop out the chants began, “Medusa, Medusa, Medusa.” It was the first time she had heard them, the first time she became aware that I was being picked on. Once she understood what was going on she gave me a reassuring smile. “You’re the most popular girl in school.” She said, “Everyone knows who you are.” That moment set the tone for my entire life. It wasn’t the name calling, or the threats, or even the pushing-shoving-pre-teen-girls. It was that moment.

I’ve always known that I’m not for everyone, and that’s okay. I have a best friend who will hide out in the bathroom with me between periods, another who will give it right back to trolls online, a cousin who happily spent an entire summer helping me make friends in a new town, and a mom who has always seen me as the most popular girl in school, even when I was decidedly not.

I’m not for everyone, and that’s okay, because I am for some people, these people, and they’re the only ones I need.

How millennials are ruining Thanksgiving

A letter to my daughter on her fourth birthday

Warning: Use of undefined constant comment - assumed 'comment' (this will throw an Error in a future version of PHP) in /home/domains/laurenwellbank.com/docs/wp-content/themes/hemingway/comments.php on line 13
8 Comments

Warning: Use of undefined constant pings - assumed 'pings' (this will throw an Error in a future version of PHP) in /home/domains/laurenwellbank.com/docs/wp-content/themes/hemingway/comments.php on line 29
1 Pingback