When you have a toddler every day is like Halloween

Halloween is almost here. And while I may not be sticking to my pre-parenting traditions (scary movie marathons, obnoxious decorations, and drinking my weight in pumpkin beer), I am still finding time to be living in a constant state of fear #isthisyearoveryet? 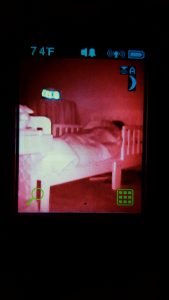 Don’t look too close, something may move…

You see, when you are a parent of small children, everyday is Halloween. Someone is always asking you for something (trick-or-can-I-have-more-crackers), there are costumes, and cobwebs. Lots and lots of cobwebs.

And like I said, shit is scary. I’m talking more than just the day to day cray that is 2017.  Toddlers are scary.  I mean, they are known for the weird things that they say and do. And weird things become terrifying things when they happen in the middle of the night.

As a matter of fact, life with a toddler is kind of like Halloween married a scary movie and they had a haunted house for a baby.  And now you’re stuck changing that baby’s diapers.

So yeah, I may not have found time to watch my box set of Nightmare on Elm Street this year. Or, been able to pencil in a haunted hayride, but I have had my fair share of scares this Halloween season.

Attention parents, you are doing everything wrong

To the woman who made fun of me today at Target