A funny thing happened in our house last week.  My husband and I were enjoying a rare moment where we actually got to sit next to one another on the couch, when he let out a sneeze.  Now, this man is a loud and obnoxious sneezer.  We’re talking cartoon style ACHOOOOO’s, complete with a full body convulsion.

So, he lets one such sneeze fly while we were sitting there.  Our daughter had previously been quietly squatting a few feet in front of us.  Playing, for maybe the first time ever peacefully by herself, reacted with an equally cartoon response.  Flinching, she jumped up, and almost involuntarily shouted, “Ham!”

It was adorable.  And hilarious.

After we stopped laughing we began speculating, why ham.  Did she have pork on the brain?  Did she think ham meant something other than, you know, ham?  Is ham her version of an expletive?  Did she mean damn?

Obviously these theories were being pulled directly out of our butts, but the one we kept coming back to was that she was trying to say damn. 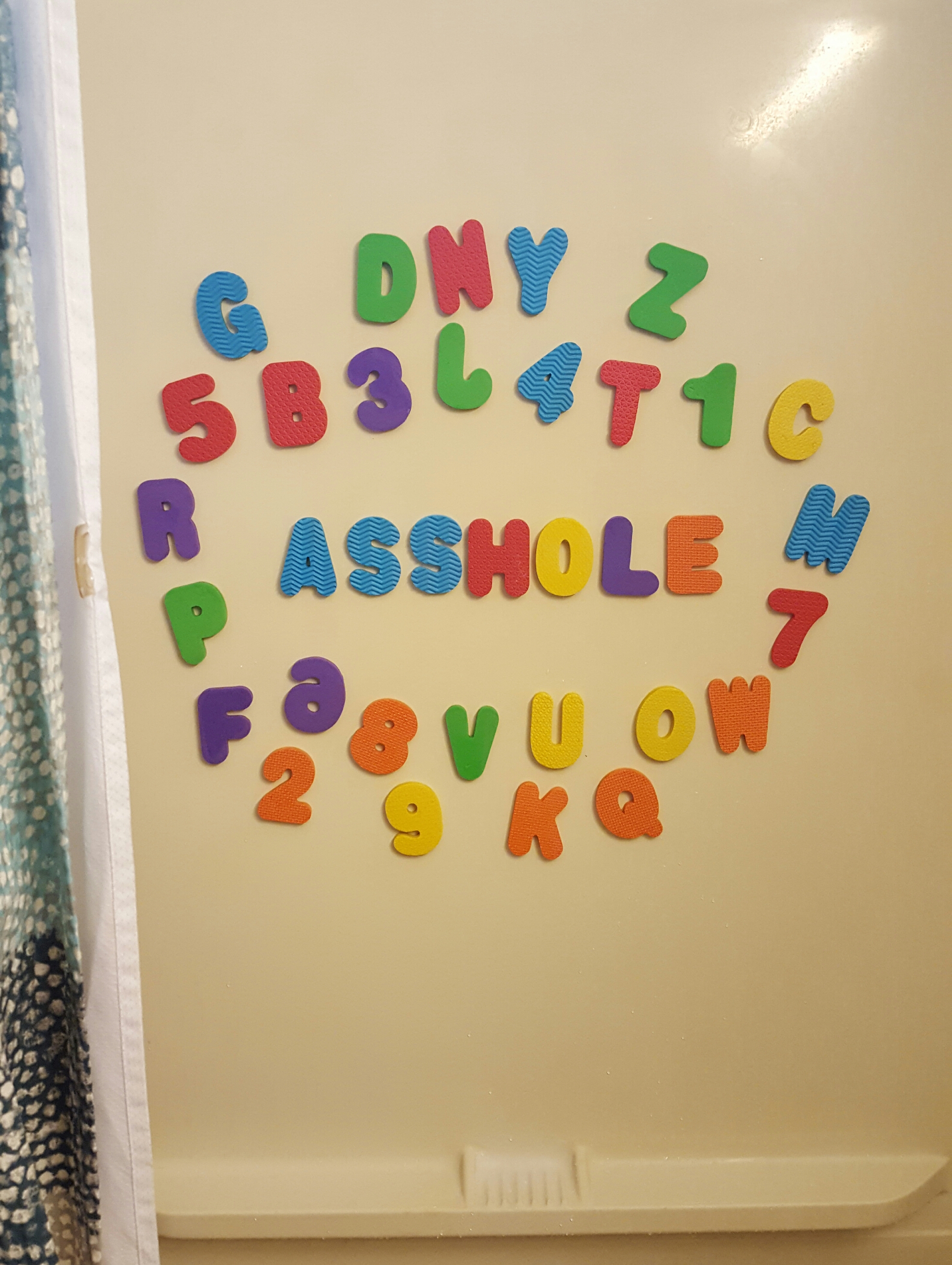 Now, I have never really thought of myself as being big with the curse words.  I actually don’t feel like I swear that much at all.  My husband is usually the one full of colorful language that has me wincing.

Naturally, I blamed him for the ham incident.  I promptly told him so, and that he better start watching what he says, because it’s only a matter of time before our daughter starts repeating everything she hears.

In slow motion he turned to face me and gave me a look that I feel should be reserved for people that say that they think that the moon landing was faked.

“Me?  You think I’m the one that needs to start watching their language?” He asked incredulously.  “You know, it doesn’t bother me when you say these things, but I think it’s going to be really unnerving the first time our daughter says cock sucker.”

And then I remembered.  I was literally just losing my ever loving mind in the kitchen when I couldn’t get the lid off the pickle jar, and I definitely said some things that I hope that my daughter never says.

Well shit, maybe I am the problem.

(That’s right, I’m admitting that I’m the problem.  Whatever, I can be mature sometimes too.)

And so it begins.  The campaign to watch my mouth, and in turn, keep my daughter from being known as that kid who drops F bombs at play dates.

So earlier this week, when a car came flying out of nowhere and careened into my lane, barely missing my front bumper, I did not shout out the first thing that came to mind.  Instead I gleefully screamed out, “Where did you learn how to drive, Apple Harvest?!” while giving him a wildly enthusiastic thumbs down.

Yeah, it probably didn’t have quite the same sting as what I normally would have said.

On the bright side, at least if my daughter had decided that today was the day to mimic me with a squeaky Apple Harvest from the back seat I wouldn’t have had to start the sweaty palm inducing count down until she said it in front of my grandmother (or worse yet, my husband who would have then pushed up his glasses so that he could look down his nose at me in a dramatic fashion while saying, “I told you so” with his eyes).

And yeah, this morning I really wanted to let fly with the colorful language this morning when I smashed my knee on the coffee table as I came down the stairs (coffee tables, the inciter of many explicit statements), but instead I swore an oath of “Mantra humming cork soaking coffee table!”

See, I can adapt.

When my oldest niece was younger, my sister told us that kids usually repeat the last word they hear.  So if you accidently let a four letter word slip, you just had to follow it up with a pallet cleanser.  There was a lot of, “Oh that son of a bitc- peanut butter!”  I always assumed when my niece grew up she would use peanut butter as its own expletive.  However, here she is, ten years old, and I have yet to hear her ask, “Where in the peanut butter is my back pack?”

I don’t remember my mom cursing much when I was a kid.  I do, however, remember her treating sucks like a curse word.  We were not allowed to say anything sucked.  Somewhere along the lines that went by the way side and we were allowed to say it.  Which as it turns out ended up being a gateway swear, as my vocabulary now shows.  So mom, you were onto something.  Also, way to drop the ball.

For now, I’ll do my best to remember that little ears are always listening.  If I play my cards right I may be able to complete this full vocabulary overhaul in time for when she actually starts picking up these more colorful words.

If I fail, she will be the kid that other kids aren’t allowed to play with, because she called a boy at a birthday party a douche bag when he pushed her off the cozy coupe.