My favorite tag team OF. ALL. TIME.

Happy April 1st and welcome to the brand new “But More Specifically.” If you’re here looking for www.LaurenWellbank.com, I’m sorry.  Mrs. Wellbank saw an opportunity to let us get our word out and graciously sold us her web domain. We hope you’ll stick around!

This weekend is the biggest sporting event of the year, WrestleMania! So we thought there would be no better time than now to talk about some good old professional wrestling.

But more specifically, we are going to discuss the late 80’s and early 90’s era of professional wrestling. This was a time of giants, a time of wrestlers with gimmicks of everyday jobs, a time of balding orange men with a baby fine mane of hair! Some wrestlers looked like they were sculpted from marble, some like they would be at the bar with your dad and uncle for the game. Some were clowns, some were dead morticians, and some were even dentists. What better topic to talk about this weekend, then the men and women who made up this vast, and colorful, roster. 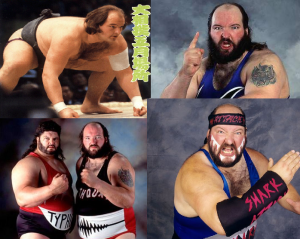 My favorite tag team OF. ALL. TIME.

But more specifically, let’s talk about the tag teams of this era. A tag team in professional wrestling is when two wrestlers team up and compete in two on two matches. Easy, right? Some matches would have all four wrestlers in the ring at the same time, but most matches involve having one partner in the match and the other on the apron of the ring, to “tag” one another in and out of the match and to take their turn. The tag teams of this era included a team interested in S&M, two guys obsessed with Mad Max, A team that was gross and gloried in it, two New Zealanders that loved to lick people’s heads, and a team consisting of a millionaire and his henchman accountant.

But more specifically, Earthquake, aka John Tenta was a favorite of ours. John Tenta was a Canadian professional wrestler who started his wrestling career in Japan. After Japan he went to work for the then WWF (now WWE).  He did a stint in Ted Turner’s future failed promotion, WCW, and then ended up going back to the WWE (albeit under a mask in a group called the Oddities). Earthquake wrestled as a singles superstar, a tag team specialist, and as part of a faction. For a big man he was quick on his feet and his backstage promos were always enjoyable, if only for the way he hopped side to side the entire time the camera was on him.

Look it up, it’s fantastic. We can wait. John Tenta was also a great and nice guy by all accounts, even in a time of egomaniacs and straight up jerks.

But more specifically, let’s chat about John Tenta’s tattoo.  Tenta had a tattoo of his alma mater’s mascot, the LSU Tiger, on his upper left arm. Tenta wrestled, played football, and was in the Rugby club at Louisiana State University. It was the only visible tattoo on Tenta, and it showed what he felt for his school. Before becoming a professional wrestler, John Tenta became a sumo wrestler. That was at only 22 years old! He did well for a newcomer, but had to keep his tattoo covered due to the stigmas it carried with it in Japan. This tattoo obviously meant a lot to Tenta, because instead of getting it removed, he quit Sumo. Clearly he didn’t believe enough in that career path to get rid of the tattoo.

But more specifically, here’s the story on the destruction of that tattoo. When he moved from WWF to WCW he had to use a new name. He started as Avalanche, an obvious play on his name in the WWF. He would eventually go on to become the Shark, and he believed so much in the longevity of that character that he got a shark tattoo over his LSU tiger tattoo. That’s right. Tenta was so into the Shark gimmick that he tattooed over his precious tiger that originally factored into him leaving the sumo profession. That’s dedication. Unfortunately, the character didn’t land well.  He eventually dropped it, and began using his real name, but sadly would never come to find any real success in WCW.

But more specifically, it looks like we are all out of room…

We hope you enjoyed the new direction www.LaurenWellbank.com is taking, until we can figure out how change the name of the website, of course.

Pregnancy and the horse latitudes, what the last weeks and sailing have in common

To my daughter on her final days as an only child

Warning: Use of undefined constant comment - assumed 'comment' (this will throw an Error in a future version of PHP) in /home/domains/laurenwellbank.com/docs/wp-content/themes/hemingway/comments.php on line 13
2 Comments

Warning: Use of undefined constant pings - assumed 'pings' (this will throw an Error in a future version of PHP) in /home/domains/laurenwellbank.com/docs/wp-content/themes/hemingway/comments.php on line 29
2 Pingbacks